Elizabeth Dee is pleased to host Betty Blayton, the first posthumous solo show of the legendary Harlem artist, activist and Studio Museum in Harlem co-founder. This non-profit exhibition is presented in conjunction with the launch of the new Miriam and Ira D. Wallach Art Gallery at Columbia University, as part of Uptown, a triennial with multiple venues at uptown institutions and historic sites that will survey the work of artists who live and work north of 99th Street. The exhibition will open on Tuesday, June 20th, from 6 to 8 PM.

“The triennial, Uptown spotlights the widespread artistic activity across our communities, and so it is imperative to include Betty Blayton,” said Deborah Cullen, Director & Chief Curator of the Wallach Art Gallery. “Her legacy—while remaining somewhat unsung—continues to be felt within and beyond the neighborhood, through her work in establishing arts organizations, innovative approaches to arts education, and unique contributions to the field of American abstract art.”

The exhibition will highlight a selected group of paintings, on view for the first time in Harlem, bringing Blayton’s work full circle, to the original home of the Studio Museum at 2033 Fifth Avenue, the current location of Elizabeth Dee. Betty Blayton arrived in New York City in the 1960s, at the time the Civil Rights, Black Power, and Women’s Liberation movements were emerging, and a critical moment in art, race, and gender politics. A lack of diversity and inclusiveness was evident in all sectors of the art world, and artists of color, with the formation of collectives and various movements, challenged the status quo and led by example, in particular with collaborative engagement uptown.

Blayton’s art engaged in a dialogue with that of her contemporaries, including Romare Bearden, Charles White, Richard Hunt, and Barbara Chase-Riboud. Avoiding explicit depictions of the turbulent 1960s and 1970s, Blayton chose to represent an inner revolution framed by a search for spirituality, serenity, and wholeness. “The intent of my work is twofold,” she once stated, “personal growth on one hand, and the other, allowing the individual viewer opportunities to bring forth their subconscious thoughts and feelings.”

The exhibition’s curator Souleo adds, “As we look at the ‘60s and ‘70s, Blayton’s formative years, compared to where we are today, we see strong parallels with various issues related to race, politics, and gender. It is inspiring to trace her evolution and see how she navigated those challenges as both an activist and artist. She had one of the strongest voices when it came to relaying what it meant to be a fully engaged artist within society, where one’s impact is felt both on and off the canvas.”

Betty Blayton was born on July 10, 1937, in Williamsburg, Virginia. She earned a BFA in painting and illustration from Syracuse University in 1959. Blayton was a founding member of the Studio Museum in Harlem and served on its board from 1965 to 1977. From 1968 to 1994 she was a consultant for the Board of Education of the City of New York, and instrumental in producing innovative arts education curricula.  In collaboration with Victor D’Amico (Director of the Department of Education at The Museum of Modern Art) and the Harlem School of the Arts, she established The Children’s Art Carnival (Harlem) and served as its executive director from 1969 to 1998. A young Jean-Michel Basquiat was one of the Carnival’s students. Blayton died on October 2, 2016, in the Bronx.  Blayton’s work will be included in Magnetic Fields: Expanding American Abstraction, 1960s to Today, at the Kemper Museum of Contemporary Art in Kansas City, Missouri, opening June 2017.

Souleo is a Harlem-based independent curator and Manager of Public Programs at the Newark Museum. He has collaborated with many institutions, including the New York Public Library, the Brooklyn Museum, Schomburg Center for Research in Black Culture, Stax Museum of American Soul Music, Leslie-Lohman Museum of Gay & Lesbian Art, African American Museum in Philadelphia, and the Houston Museum of African American Culture. He is a frequent contributor to The Huffington Post. 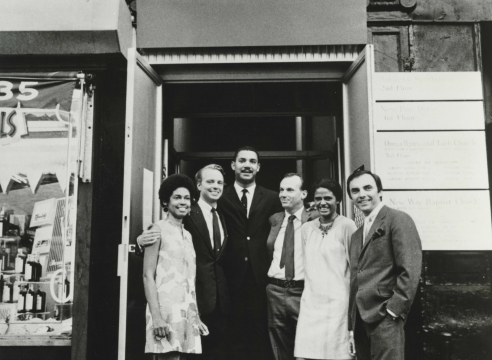