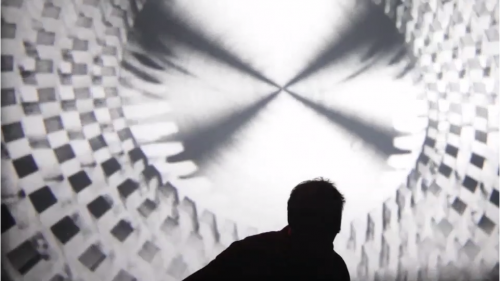 For the past several years, Philippe Decrauzat has developed a body of film and video work concurrent with his pictorial practice. Through this filmography, he develops iconographic references within the work – which enriches the entire oeuvre. For his most recent film Anisotropy (2014) Decrauzat invited Alan Licht, a key figure of the noise and minimal scenes, to collaborate. This alliance can be read, seen and heard as a modern visual demonstration, shifting boundaries and perception thresholds in the history of art and visual culture.

In 2003 Alan Licht released A New York Minute, an opus divided in two parts. Part one, ”Studio” is composed of a series of recordings exploring the possibilities of multitrack recording – that is, the layering and mixing of multiple sound recordings to create a cohesive whole. Part two, “Live,” is concerned with instrumental virtuosity. With an electric guitar, Licht weaves fluid landscapes in endless variations, stridency and harmonic touches. The achievement of this supposed duality is exemplified in A New York Minute’s fifteen-minute compositional introduction. Composed by a series of weather reports, it simultaneously condenses, summarizes and introduces the atmospheric content of the album. This preface precisely situates the work, while strengthening the abstraction of its content. A New York Minute is also well interpreted as the spectral expansion of a short never ending meditation, an endless climb – a quality consistent with drone music, of which Licht is a contemporary disciple. Minute translates from French as a physical cartography. In legal terms, it refers to the origin of a decision, its first official record. However, as accurate as their initial perception and interpretations may be, both parts of A New York Minute gain their gravity once experiences at the appropriate volume.  The last track, "Remington Khan,” subtitled “Hearing Test,” begins at an indiscernible level and rises gradually. A New York Minute comes across as central in Licht’s discography, as it is sufficiently punctuated by indications, iconography or titles – making the “sound fiction" intelligible, which his output has been exploring for the last twenty years.  His affliation with historical vanguards is crystallized in his relationship with the Minimalist experimentations of the 60’s and 70’s, the heterogeneity of their flirtation with the counter-cultures and subjective permeability.

Probably driven by a pop sentimentalism, Licht chose “Perfect Lovers” by Felix Gonzalez-Torres to illustrate his record. In relation with the lover clocks of Gonzalez-Torres, the revolutions of Anisotropy are monomaniacal and limited to a single face, yet still disruptive. Carved in an aluminum block, the sculpture featured in the film is a third larger than a record; it has a diameter of  48cm and is about 9cm thick. Eventually, the repetitive rotations divert light waves of the solid and make them visible. “Anisotropic” is an object whose characteristics vary according to its orientation. The film manifestation of the anisotropic object’s rotations closely resembles a vortex and its interference creates unconventional visual distortions.  This singularity is also on Decrauzat’s filmography, although Anisotrophy knows no filmography equivalent in Decrauzat’s practice.  Unlike A Change of Speed. A Change of Style, a Change of Scene (2006), after Birds (2008) or Screen O Scope (2010), the film is not a product of recycling of pre-existent shots - geometric grids, images, movies - but from the direct input of a camera on a three-dimensional moving object. For those familiar with the work Decrauzat, Anisotropy can be read as a sequel to László Moholy-Nagy’s Ein Lichtspiel Schwarz-Weiss-Grau, a long-standing influence within Decrauzat’s environmental installations and sculptures. But the interference on the film goes beyond the mechanical ballet world of the 20’s and 30’s. Apart from its film existence the disk of Anisotropy could have never had any material existence. Beginning with the digital extrapolation from a 2D scientific illustration, it is then built into a 3D mechanism, and then captured at a rate of 24, 48 or 64 frames per second on silver film. Like Screen O Scope and its cloaked reference to the naturalistic cinema of Kurosawa[1], Anisotropy is a return to cinema. The plateau that runs in front of the viewer is a reconstructed rotation. Projected on a screen, the luminous body derives from the rhythm of the shutter of the camera and the projector. In this form, it reminds in a obvious way of praxinoscope trays. Therefore disguised as a tribute to the avant-gardes of the 1920s and 1930s, Anisotropy revives a fundamental aspect of the experimental cinema of the 60’s and 70’s: the spatial and temporal inversion bordering led near  the minimalism. Like Michael Snow’s Wavelength (1967), which was a clear breakthrough towards photography, or Sharits’ structural cinema practice touched with optical nervousness, or the poetic reflexivity of Frampton, or the covert candidness of Warhol’s photography, Anisotropy develops both a horizontal and temporal vision of the shot. More than a lighted picture rail, the experience of the black room amplifies the frontal aspect of the screen until its dissolution. The exploration at the same time of the drone by La Monte Young and Phill Niblock, operated in a similar way. In a comparable style, the minimal compositions of Licht amplify the moment, the sound, the magnetic vibration and are placed in a gritty landscape. It is these gestures that drive Decrauzat’s painting, irretrievably too minimal to be further classified as Op Art.

This is not Decrauzat’s first collaboration with Alan Licht. This invitation follows an encounter between the musician and Marrakech Press (a collaboration between Decrauzat and Mathieu Copeland). In Alan Licht / regional press (2011), a musical improvisation on guitar is superimposed on views of a destroyed printing shop. The amplified fragments, themselves audio tools used by Licht, fit within images of the brutally scattered fonts. Licht’s sound intervention in Anisotropy pursues these disturbances between amplification systems, reproduction and distortion. It is not synchronized or analogue but "friendly transformations". It distorts, but in the direction of sameness, so that if his power was not balanced the world would be reduced to a point, to a homogeneous mass, the dismal figure of the same: all its parts would be held and communicate with one another without break or distance, as the metal chains suspended by sympathy to the attraction of one magnet.[2]” Namely the magnetic windings organ agreement supported the early five variations of “Rabbi Sky” (1999) by Licht or the visual dust of Anisotropy.

[1] One of the main pattern on Screen O scope is inspired by the sun reflected on the water, which appeared in Rashomon