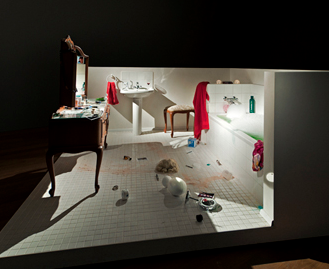 Mac Adams' photographs and installations broach the issue of narration with similarly sparse means as Hemingway, exploring the fictional potential that can emerge from the juxtaposition of a few images or objects: “How can you tell a story by not using more than two or three images, or describe a situation using as few objects as possible?”, the artist asks.

The noir genre imposed itself on Mac Adams in his earliest photographs as a favourite field of investigation because the complexity of the relations between narrative elements - characters, facts, places, objects... - forms, more than in any other fictional genre, its very node. His works are often organised in two- or three-image sequences and show us narrative snippets in which the main action is invariably absent, relegated to the space between images, into the temporal or off-screen ellipsis. Mac Adams defines this approach with the term “narrative void”. The image becomes a network of clues that the spectator is invited to go through in the manner of an inquiry, shedding light on the mechanisms and mainsprings of the plot itself at the same time as it proposes an open reading.

Mac Adams is known above all for his photographs, but since the beginning of his career he has also been producing installations in which, nevertheless, photography has a central place. The show at Mudam emphasises this aspect of his work by presenting three installations, in tandem with a selection of photographs ranging from the 1970s to the present day.

Conceived as fictitious environments developed around crime scenes, Passenger and The Bathroom are reconstructions of two installations initially created in 1978. A third installation, specially devised by Mac Adams for the museum’s Pavilion, is presented in the form of a cluster of images arranged on tables, associating archival imagery and photographs by the artist.