Elizabeth Dee is pleased to announce RGB, Mark Barrow's second solo exhibition with the gallery.  The show will open November 8th with a reception for the artist from 6-8pm.

Barrow presents a new series that takes the RGB color model as its starting point.  RGB color space is an abstract, mathematical model in which each color is given a distinct position in space that can be plotted on a graph with three axes—one for each of the primary colors. Barrow replaces this Cartesian system with a loom's own mathematic logic and a more intuitive color theory.

For the works, Sarah Parke has designed unique fabrics based on the pixels of a screen—each with varying amounts of red, green, and blue threads. Barrow matches the fabric's threads in paint, mixing together the same percentage of red to green to blue.  As a result each fabric's colors yield a different grey with which he begins each painting.  By covering only portions of the fabric's pattern, Barrow uses the underlying colored fibers to shift the paint's hue, often using only two or three grey tones to create entire compositions.  Focusing on the individual units of color (pixels, threads, dots of paint) Barrow creates both a point of equivalence and inflection. In layering these different logical, mathematical, and perceptual systems, he dissolves their boundaries and offers a more nebulous, abstract system.  Ultimately each piece is titled according to the prominence of the three colors (red, green, blue) from greatest to least.

Also on view is a series of drawings operating under similar logic. Taking a weaving draft as a template, Barrow grids sheets of paper and colors dots to create patterns.  Using only a red, green and blue pencil, he adjusts the ratio of the three colors and amount of pressure on the pencil to create his compositions.

RGB marks Barrow's ongoing interest in the intersection of phenomenology and the science of perception.  His collaborative and idiosyncratic process functions on a seemingly molecular level, tweaking the DNA of a broad range of sources.  He approaches his influences as empirical sets of data;  his process designed to test their finiteness and find the point at which they begin to deteriorate.

Mark Barrow has exhibited in various solo and group contexts internationally, such as ZERO, Milan, White Columns, New York, Yale Museum of Art, among others. The artist will be the subject of a forthcoming publication by Mousse in 2013. 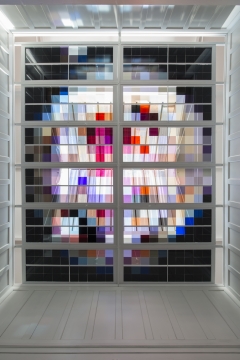