A Crackup at the Race Riots

…[In] thinking of the idea of authorship, anti-authorship, and appropriating certain types of writing, taking credit for that writing, maybe manipulating it, or writing something and giving someone else credit for it, or fake quotations, or a kind of mixture of real quotations and manipulated quotations, trying to blend them in such a way that even I didn’t know where one began and the other ended. I remember seeing all those Sherrie Levine photographs, those re-photographed Walker Evans photos, and wondering if there was a way to make a book that worked like that. Something that still had a soul but at the same time was kind of inexplicable. A kind of anti-authorship. Or I wanted to write a book with pages missing in all the right places.

When working as a [trio], you have to put aside ownership of some things. When you make something, you never know what will happen with the part that you contribute - someone else can change it. With the Internet, it’s the same thing. We take things. It’s not our thing, but we make it our own through that process. And maybe it’s a little bit the same as a social network in that way. In this age of the excessive use of images, for us it’s now more relevant than ever to use found footage and recycled imagery. Especially with an abundance of amateurish made “private” imagery put readily available online, the idea of authorship becomes even more questionable. But raising this question can be seen as the essence of the work.

Elizabeth Dee is honored to present the United States premiere of A Crackup at the Race Riots, Leo Gabin’s first major and newly completed feature length video. Solely produced from found online footage, Leo Gabin faithfully translates the experimental novel by Harmony Korine (a longtime collaborator and friend) in a highly experimental and groundbreaking new form. Occupying two artistic enterprises and generations, the dialog between Gabin and Korine is exceptionally vibrant in a time of relative, variant and abundant image dissemination around popular culture and social media. Using various actual and imagined subtexts from Korine’s original 1998 text — referencing economic collapse, teen culture and the influence of TV—Gabin interprets, with today’s relevance and tools, virtual social interaction, the evolution of pop culture and its devolving distribution across social platforms, pre and post digital reality, and the ultimate potential dematerialization of narrative. In doing so, Crackup… explores various artistic and political responses to notions of reality within fiction in our time.

Crackup at the Race Riots is a history piece of today in the making or deconstruction, referencing American culture’s lost status and vibrant potential for regeneration. In setting much of the work in Florida’s economic and social isolation, Korine recently returned to Florida to make his film Spring Breakers. Leo Gabin worked for over two years on a faithful interpretation of hours of footage from YouTube in this context, to interpret a highly studied and transposed original work, with imagery taken entirely from Gabin’s deep curation and experimentation with social video media. The resulting work illuminates the core methodologies of their decade long practice and explores the potential of this voluminous new territory.

Leo Gabin is a trio of artists who have worked together since 2000. All three were born in Ghent, Belgium, where they continue to live and work. They received their BFA at the Royal Academy of Fine Arts, Ghent. Recent group exhibition include ‘PRIVAT’, Schirn Kunsthalle, Frankfurt, curated by Dr. Martina Weinhaert. Solo shows include ‘New Holland’, St. Petersburg, Russia; The Cultural Centre Bruges, Belgium; Peres Projects, Berlin, White Cube, London; and the Kunstraum Muenchen, Munich. This is the artists second show at Elizabeth Dee. 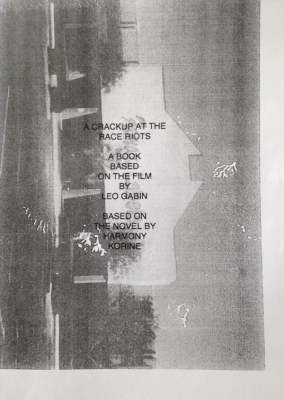