Elizabeth Dee is honored to present SPACE FORGETS YOU, a new exhibition of recent paintings and works on paper by John Giorno. The exhibition opens on Thursday, April 2nd with a reception from 6-8pm, and continues through May 9th, 2015. To accompany the exhibition, Giorno will also perform at the exhibition’s final week on Friday May 8th at 6:30pm.

Giorno’s explosive, visual and concrete works continue in a new series of rainbow paintings that occupy the front gallery. Works such as LIVING IN YOUR EYES, LIFE IS A KILLER, and I WANT TO CUM IN YOUR HEART coexist and resonate.  The exhibit continues with two bodies of drawings, including THANX 4 NOTHING, GOD IS MANMADE, and IT’S WORSE THAN I THOUGHT. The devoted rooms to each series manifest the range and depth of Giorno’s creative production in painting, graphite, and watercolor. The pulsating delivery of Giorno’s reading style, with line breaks and repetition, dictate tempos within the exhibition and encourage reinvestigation of phrases.

Many of the texts employed in Giorno’s new works were originally sourced from poetry that the artist has written, or lines that never made themselves into a final poem. The clarity of the words’ visual impact hangs in the air and penetrates the mind. Giorno’s history with concrete poetry techniques date back to his first visual works in the late 1960s. The culmination of his practice today, can arguably be traced back to his first series, when Giorno was exploring the audio and visual perception of words on a field. This interest led to collaborations and sound recordings that further defined Giorno’s live performances.

Giorno is an artistic innovator who has been defying assumptions of poet, performer, political activist, Tibetan Buddhist, and visual artist since he emerged upon the New York art scene in the late 1950s. He is one of the most actively producing and performing artists of his generation.  In the 1960’s, noticing that poetry readings were curiously lacking in audio capability, Giorno began collaborating with innovators at the forefront of electronic audio technology. He began producing multi-media, multi-sensory events concurrent with Warhol’s Exploding Plastic Inevitable. He worked with Bob Rauschenberg in Experiments in Art and Technology (E.A.T) in 1966, and with Bob Moog in 1967-68. His breakthroughs in this area include Dial-A-Poem, which was first exhibited in 1968 at the Architectural Society of New York, and was additionally exhibited in the Museum of Modern Art’s Information exhibition in 1970.

Giorno’s work has grown in activity, scope, and scale in recent years. He has continued to connect with artists of various generations. He is an energetic collaborator with his peers, most notably Warhol (Giorno was featured in Sleep). Rirkrit Tiravanija and Pierre Huyghe have collaborated with Giorno. Most recently Ugo Rondinone is creating a restrospective of Giorno’s.

The experience of Giorno’s work is provocative in all its forms. Interestingly, the artist’s audience extends beyond the self-selecting demographics of poetry and language-based conceptual work. Giorno’s artistic contributions to various movements are equally significant. Resonating with common interests of appropriation, the cultural impact of media and advertising, as well as language via visual culture, one could argue his output of work in all forms is even more resonant in today’s culture.

John Giorno (born in New York in 1936) has exhibited widely in museums internationally. This is the artists first exhibition at the gallery. Most recently, John Giorno has exhibited at Vienna Seccession, MoMA, New York, Artist Space, New York and Centre d’art contemporain, Metz, FR.  His forthcoming retrospective, I ♥ John Giorno, created by Ugo Rondinone, will take place at the Palais de Tokyo, Paris opening on October 18, 2015. 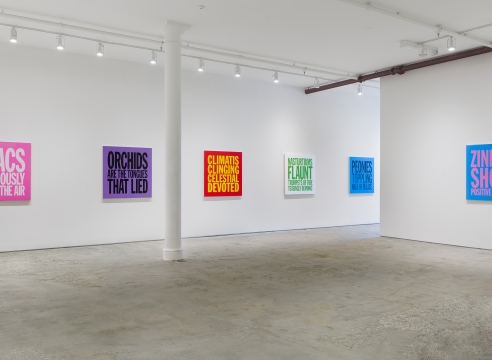