Joan Wallace: Seminal Works from the 1980s to Now

Elizabeth Dee Gallery is pleased to present the second research exhibition, Joan Wallace: Seminal Works from the 1980s to Now. The exhibition will open on Tuesday, February 28th, with an opening for the artist from 6-8PM. This is the artist's first show in New York in 12 years.

Following Wallace's participation in the gallery's recent exhibition, Every Future Has a Price: 30 Years After Infotainment, which explored the East Village gallery scene of the 1980’s, Joan Wallace: Seminal Works from the 1980s to Now further explores Wallace’s earliest work as part of the artist team Wallace & Donohue, as well as the individually authored works that followed. The survey includes works from Who’s Kidding Who, their theatrically staged show at their Fifth Avenue apartment in 1983, along with works from subsequent solo shows in New York at The New Museum, Postmasters Gallery and John Weber Gallery. Institution shows include Forefront: Wallace & Donohue in 1991 at the National Museum of Women in the Arts, Washington D.C., curated by Susan Fisher Sterling, and Joan Wallace: Methods of Attachment in 2004 at MoMA PS1, curated by Robert Nickas.  In 1992, Wallace participated in Documenta IX as part of an installation curated by artist Cady Noland on the theme, “Towards A Metalanguage of Evil.”

Wallace studied at the Hartford Art School in Hartford Connecticut with David Salle and Jack Goldstein starting in the late seventies, with Sherrie Levine and Edit deAk among the guest teachers. Geralyn Donohue and Annette Lemieux were also students during this period, after which Wallace & Donohue and Lemieux would establish themselves in the burgeoning East Village art scene. From 1983 to 1990, Wallace was part of the collaborative team Wallace & Donohue, which created work that is highly theatrical and self-aware, employing language, an absurdist sense of humor and various devices—rotating and sliding panels, track lighting, a surveillance camera—to interrupt the otherwise passive act of looking. Wallace & Donohue began to author their work separately in 1988, and dissolved the partnership two years later.

Wallace’s conceptually driven art is rooted in a unique form of critical writing she developed as part of the artist team, Wallace & Donohue. A selection of Wallace & Donohue’s texts will be on display from the 1981-87 period, exemplifying an aesthetic theory comprised of tightly conceived vignettes that house colorful, extemporaneous dialogue, comic timing and critical text. Wallace & Donohue’s writing extended to their press releases and distributed ephemera, as well as humorous, text-based performance pieces staged in the art world context.

One of the earliest visual examples of Wallace & Donohue’s collaborative work is a painting titled The Institution of Green (1983). This mint green monochrome surrounds an excellently executed pastiche of a Jackson Pollock drip painting indicating a sensibility that’s at once immediate and critically circumscribed given its sign-like presentation. In working collaboratively, Wallace & Donohue brought into question the conventional notion of authorship, which was in keeping with an art world increasingly immersed in a Post Modernist ethos whereby meaning itself is indeterminate. In so speaking, Wallace & Donohue’s multiplicity of references is as reflective of viewer projection as the rear view mirror affixed to the side of another of  their early canvases titled Go (1983). Art critic Dan Cameron later termed their practice “mixed metaphors between the world of pure ideas and the resolute thingness of objects.”

Wallace’s work occupies a unique position among the currents that have animated art and engaged artists since the 1980s: appropriation, the ‘end’ of painting, and the reinvestigation of Pop, Minimal and Conceptual art. Wallace’s The Frigidaire Painting (Like a Pariah) (1989) literally wraps a painting around a refrigerator in a theatrical gesture that succinctly annexes for painting “a sculptural/cultural readymade of nostalgic proportions.” The small monitor housed inside the refrigerator inserts what the artist terms “an unexpected consciousness” with a lens that pans the sensual contours of the 50’s Frigidaire, at times transforming, at others fetishizing its interior and exterior worlds, as if exploring interiority itself. Venturing further into juxtapositions engaging social, historical and political content is Wallace’s Bob’s Your Uncle (1991), which contains a towering “closeted” reproduction of the 1974 Artforum photograph of famed minimalist Bob Morris clad in S&M gear, as revealed from behind a facsimile of a Frank Stella “pinstripe” painting confined to a silhouette based on Wallace’s profile. Citing that the conduit from Minimalism to Post Modernism is a fascist esthetic, Wallace here confronts “the very mechanism of power: that is, visual, authoritarian seduction.” Wallace further notes “the dangerous ease with which we may march along, disconnected from what certain psychologists have termed our ‘authentic selves.’” This “disconnect” is evidenced in the Stella/silhouette that’s being visually dissected as the panels slide open so to visually emulate “the inherent fragmentation of constructed identity.”

As Wallace’s work progressed its constructed aspects became increasingly complex, as seen in Standing, against all that’s left of home, Nos. 1 & 2 (2002), with its “drawers at cross purposes” overlaid with silk screens of Jasper Johns’ Three Flags (1958), shown at various angles of rotation. The inferred political content of the piece’s “variegated scrutiny” is, the artist states, a form of “subliminal protest.” In Piece of Cake (For Jack Goldstein) (2004), Wallace pays homage to Goldstein and his films. Lush filmed imagery replaces a cut out part of the painting’s surface to make for a substitute mise-en-scène, one that reflects the painting as a literalist object, while serving a more charged, narrative function.

The theme of violence that emerges in this survey show is at times subtle and even explosive, as per the slow-motion exploding cake imagery of Violent Pop, No. 2 (2005). At the same time the show’s iconography is suggestive of “home,” this given the 1950’s refrigerator in The Frigidaire Painting (Like a Pariah) (1989), the stainless steel pool ladder in The Pool Ladder Painting, No. 2 (2004), and the homey theme of cake itself. As Wallace wrote for her 2005 show, Violent Pop: “I would offer that my nostalgia for celluloid (these works were shot on 16 mm) is commensurate with my nostalgia for ‘home’ (the greatest wounds lying beneath what we romanticize most).”

Hidden Authoritarian (2007) is the most recent work in this survey show. Quoting from the artist’s notes: “The black vinyl encased heart-shaped stretcher with its ‘mute’ silver zipper suggests a kinship with the hidden sense of subtext in the ‘Morris’ piece and the deft co-opting of Jasper Johns’ ‘drawers’ in the ‘Standing’ piece. Only here the work alludes to the masking of authoritarianism with decadence, a sleight of hand that, historically speaking, goes to the heart of a mass deception to which we as a culture are still blind.” 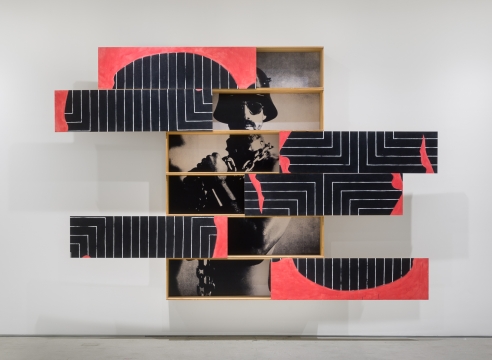